Two months after the first case of Covid-19 was reported, India went into an abrupt lockdown. How many people were moved out of the formal economy? How many firms had to downsize or shut shop? We analysed data on the formal economy to arrive at an estimate. 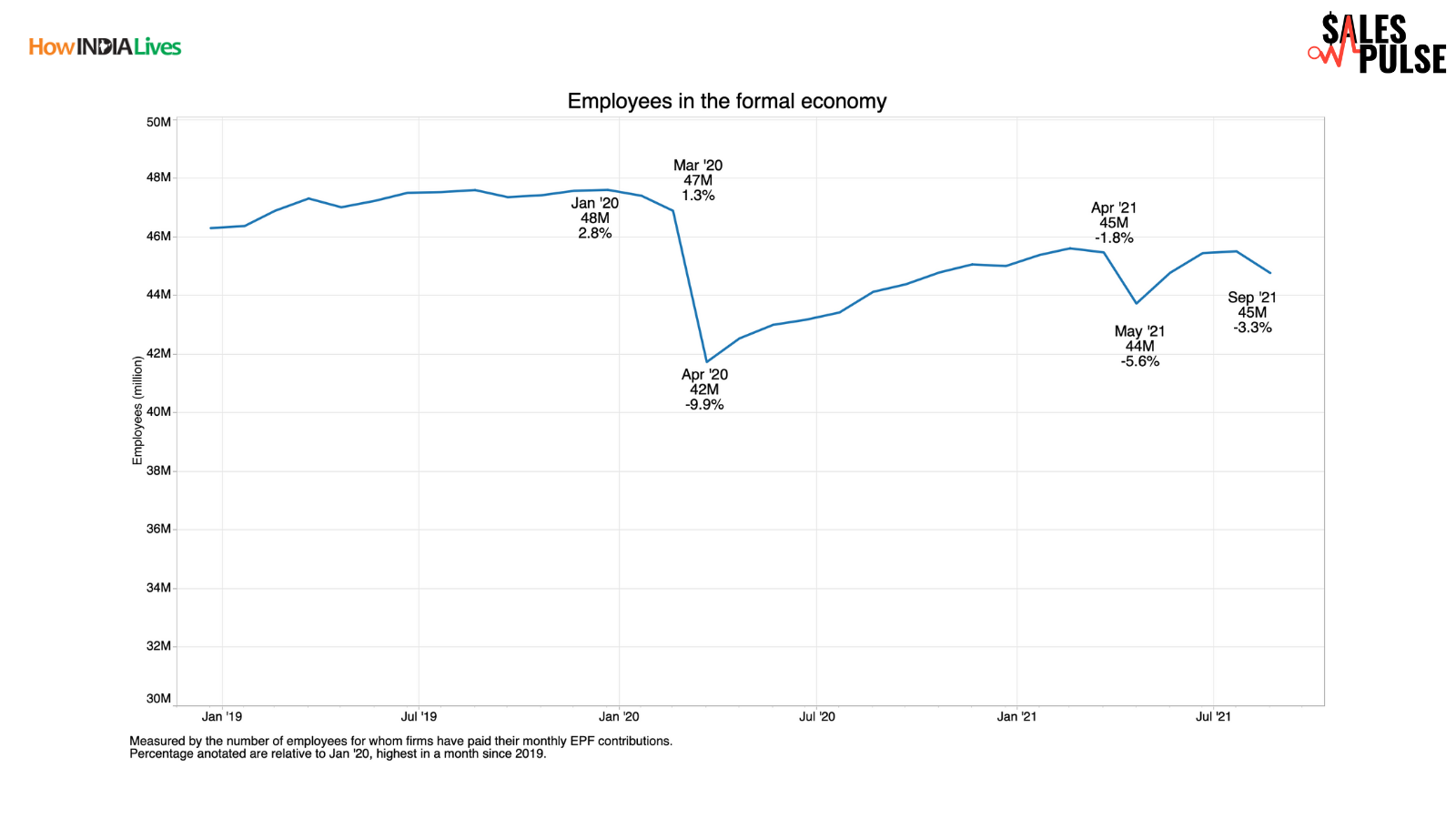 In January 2020, about 0.58 million establishments had paid their EPF monthly contributions, the highest since Jan 2019. In April 2020, the first month of the lockdown, this dropped to 0.54 million, 5% lower than 2019. The recovery was there albeit slow, until the second wave hit. 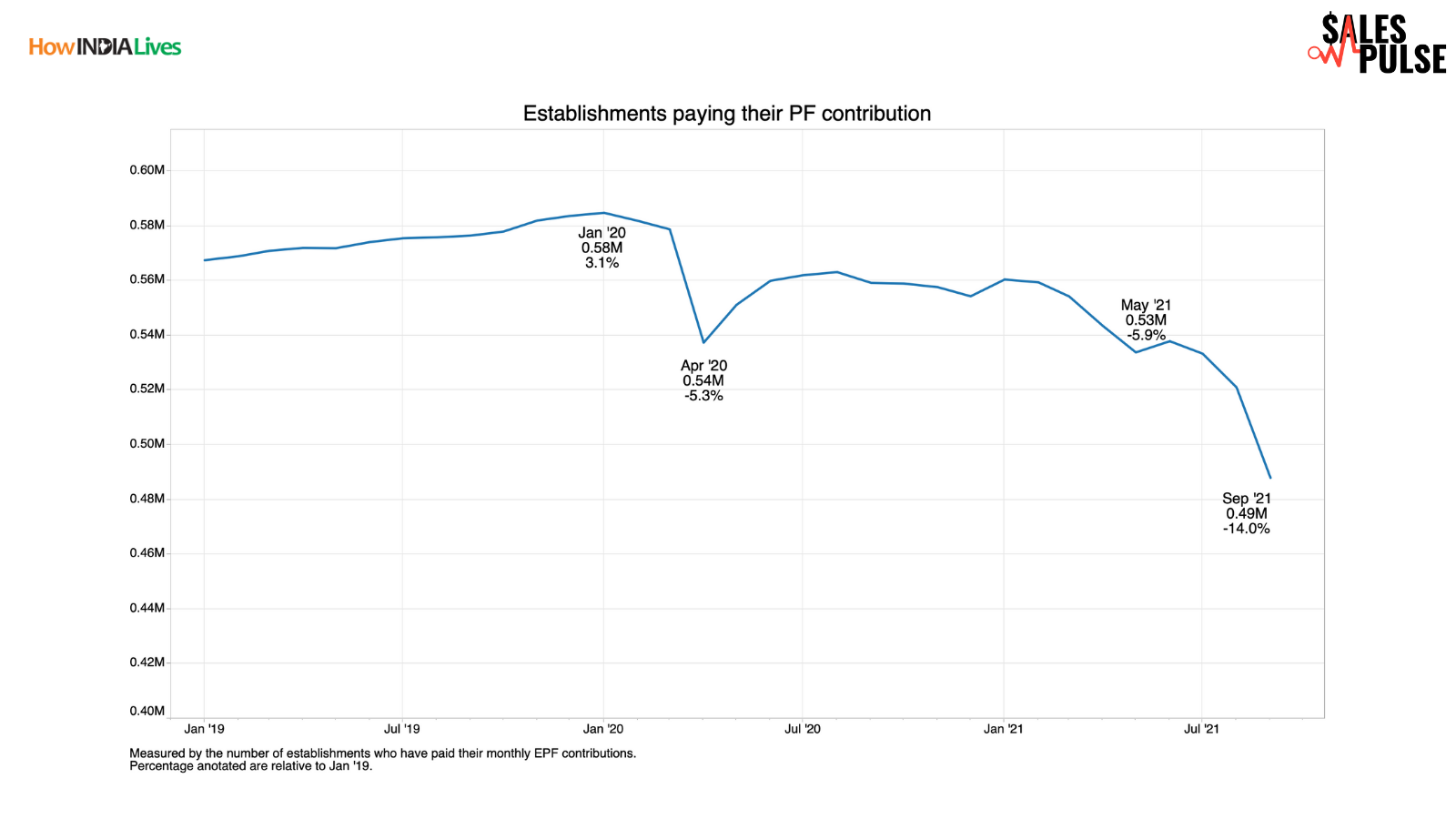 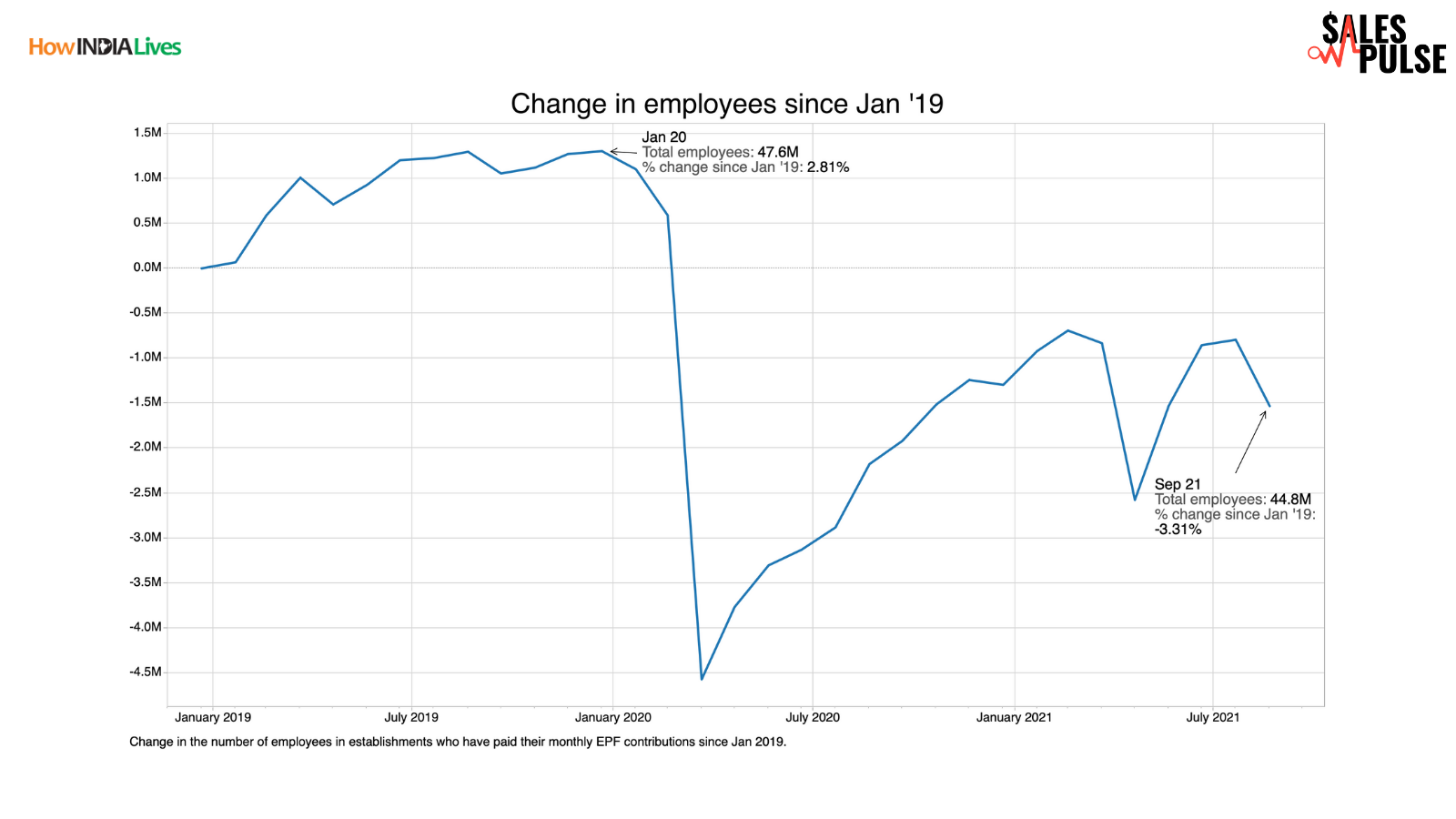 This means that firms that survived and continued to remit their EPF contributions were able to add jobs back, but the ones that downsized or shut shop couldn't. Even as employees came back to the formal economy fold, firms continued to drop off. We see the trend in the sectoral breakdown of firms and employees as well. While there were several sectors that grew massively (IT, banking, insurance), there were several sectors where firms were wiped off (hospitality, tourism, entertainment). 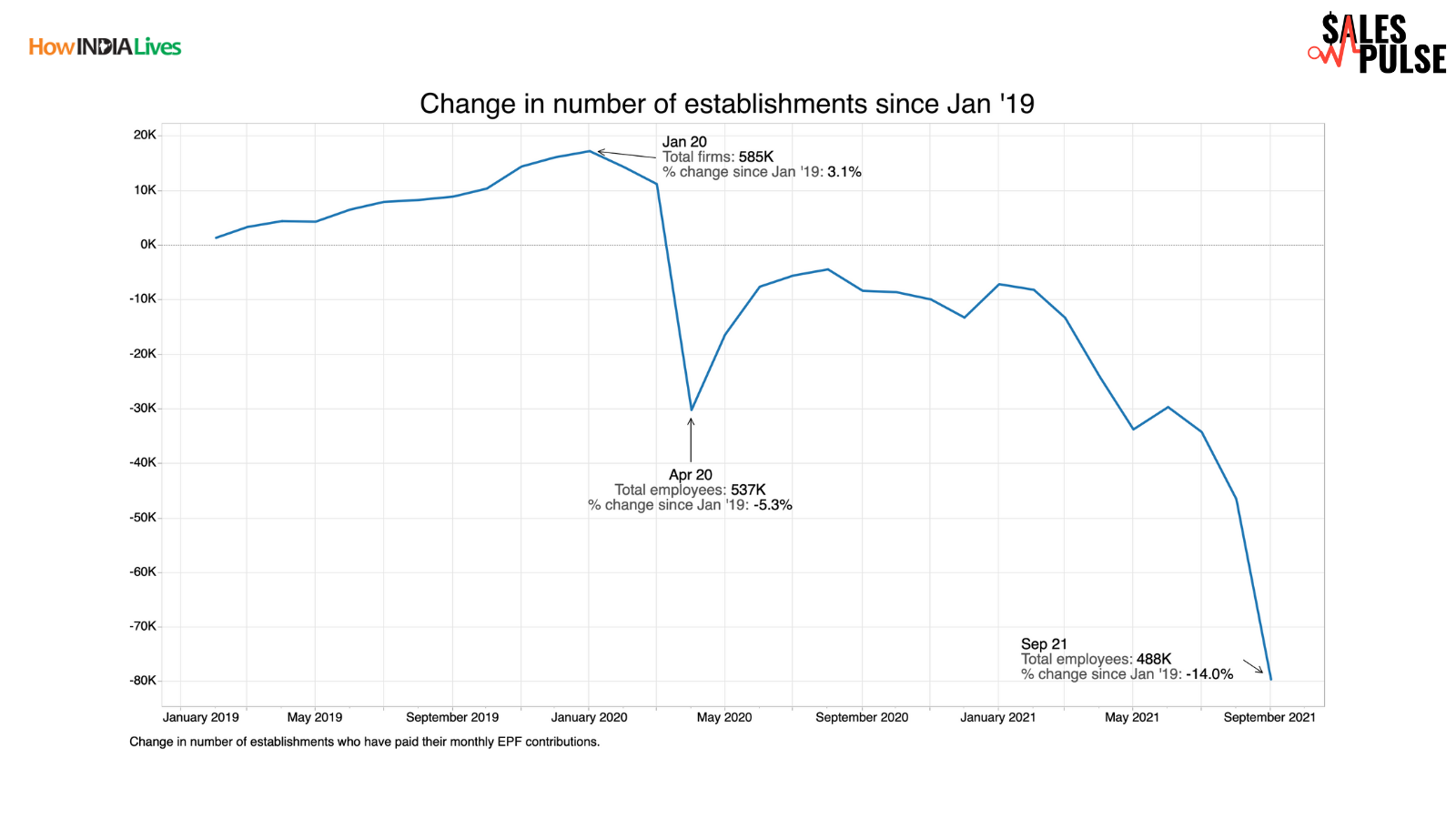 Among the top 15 districts by employment, Bangalore added most jobs among top 15 centres post Delta wave. 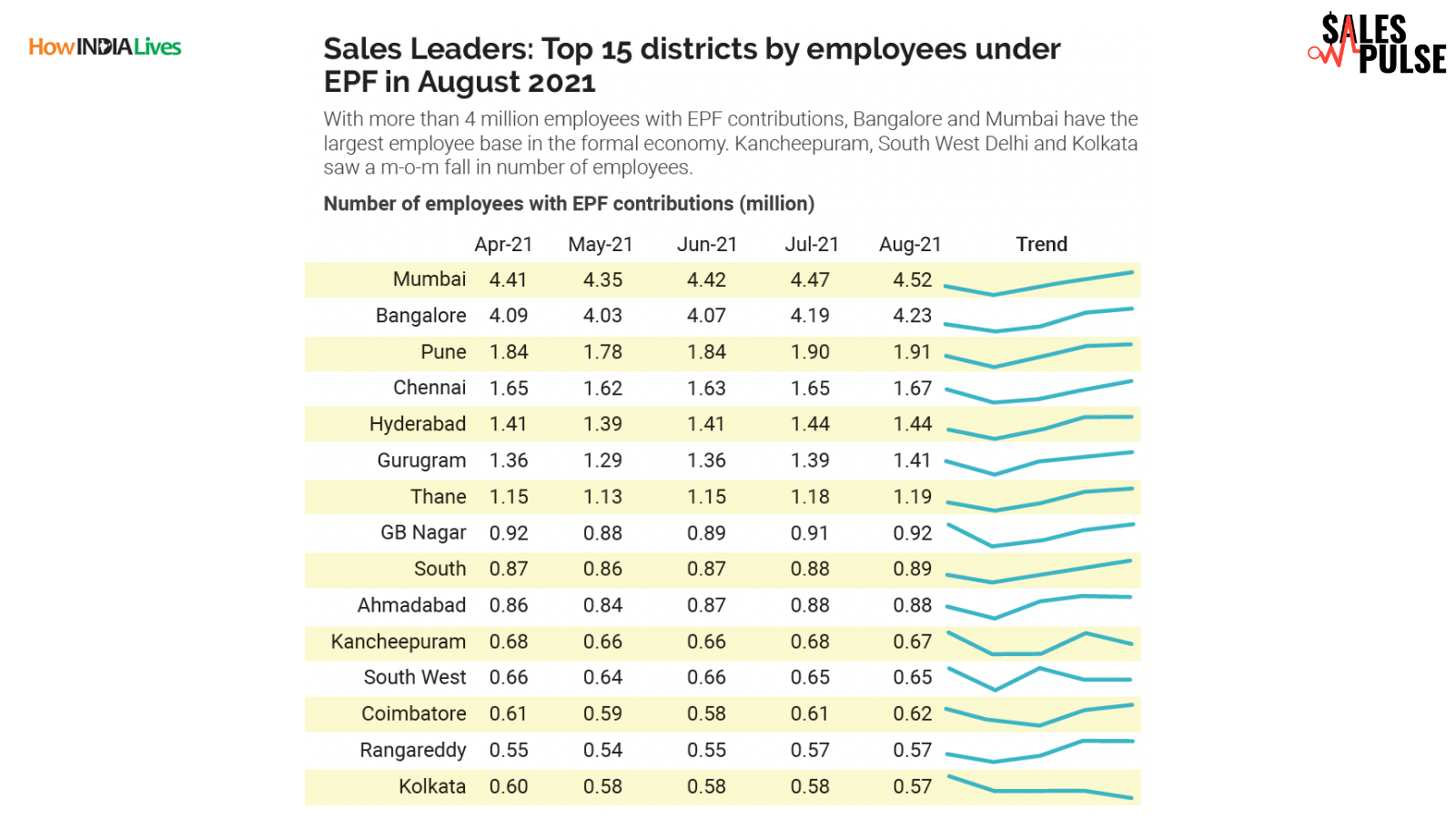 To identify the growing markets, we looked at the next set of 50 districts below the top 15 mentioned above. Among these 50 districts, we qualified the top 15 districts with the highest annual growth rate as "Growth shoot" districts. Vadodara was a surprise performer, adding more employees into the formal fold than traditional job centres.

THese insights are from our latest data product, Sales Pulse which tracks high frequency metrics from more than 15 data sources. Sign up for a free 14 day trial period now.

We also release a monthly data report with an update on several key indicators across consumption and employment across rural and urban districts. Sign up to download the latest report!

V
Vaidik is the author of this solution article.

Did you find it helpful? Yes No

Send feedback
Sorry we couldn't be helpful. Help us improve this article with your feedback.